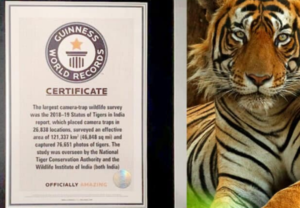 For being the world’s Largest Camera Trapping Wildlife Survey, the 4th Cycle of the All India Tiger Estimation 2018 has made it to the Guinness Book of World records.

The 4th cycle of the All India Tiger Estimation 2018 counted 2,967 tigers, which is about 75% of the global tiger population.

Guiness World Records, known from its inception in 1955 until 2000 as The Guinness Book of Records and in previous United States editions as The Guinness Book published annually. It list world records both of human achievements and the extremes of the natural world. It is the brainchild of Sir Hugh Beaver. It was co-foundered by twin brothers Norris and Ross McWhirter in Fleet Street, London, in 1954. And it is publish in various languages including Hindi as well. 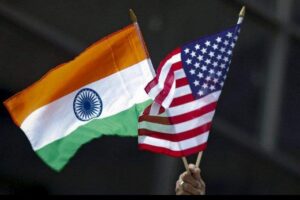 The US remained India’s top trading partner for the Second consecutive fiscal in 2019-2020, which shows increasing economic ties between the two countries.

In 2018-19, the US first surpassed China to became India’s top trading partner.

The data also showed that China was India’s top trading partner since 2013-14 till 2017-18. Before China, UAE was the country’s largest trading nation.

National Thermal Power Corporation, NTPC Limited, a Central PSU under Ministry of Power has won the prestigious CII-ITC Sustainability Award 2019, under Outstanding Accomplishment in Corporate Excellence Category. The company has also received Commendation for Significant Achievement in the category of CSR.

It is considered to be the most credible platform for sustainability recognition in the country.

NTPCs flagship CSR program Girl Empowerment Mission , a four weeks residential program has been institutionalized in the vicinity of its power stations for the benefit of school going girls to support in their overall development.

It is headquartered in New Delhi.

It became a Maharatna company in May 2010.

Rare Comet Neowise to be visible in India for 20 days:

A newly discovered comet C/2020 F3, also known as Neowise, which has been spotted from several parts of the world, will now be visible in India.

It will make its closest approach to the Earth at a distance of 64 million miles or 103 million kilometers while crossing Earth’s outside orbit on 22nd July 2020.

It is also known as NEOWISE after the National Aeronautics and Space Administration (NASA) telescope that discovered it.

On 3rd July, it was closest to the sun at 43 million km due to which its outer layer was released, creating an atmosphere 9referred to as coma) of gas and dust from its icy surface. It will be visible through binoculars or a small telescope.

About Comet: Comets or ‘dirty snowballs’ are mostly made of dust, rocks and ice and can range in their width from a few miles to tens of miles wide. Comets do not have the light of their own and the visibility depends on its gas and dust outbursts. Humans see the reflection of the sun’s light off the comet as well as the energy released by the gas molecules after it is absored from the sun. To be visible, a comet must make a particularly close approach to the sun to produce enormous quantities of gas and dust or it should make a relatively close approach to the Earth so that it is easily viewed. 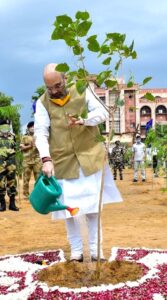 The personal of BSF, CRPF,ITBP and CISF-deployed in Chhattisgarh for Anti-Naxal operations, Planted saplings in their respective campuses as well as in their places of deployment.

All the CAPFs will undertake a drive in their respective organisations to achieve the collective target of planting more than 1.35 crore saplings by this month.